It was raining goals on Tuesday evening in Sky Bet League One with drama everywhere you looked on a crazy night of football that featured a whopping 37 goals.

At the top of the table, Portsmouth won comfortably again as they scored a goal in each half to extend their run as leaders of the division. But the drama came further up north where Sunderland eventually overcame Barnsley 4-2 at the Stadium of Light.

The Black Cats had blitzed their visitors from the off and raced in to an early 3-0 lead inside 32 first half minutes to send the home fans crazy. But the Terriers weren’t going down without a fight and they pulled a goal back on the stroke of half time through Kieffer Moore.

Early in the second half, he scored his second of the night and 12th of the season and it was game on all of a sudden. But Sunderland extended their unbeaten run to 14 games when substitute Luke O'Nien clinched the win, scoring with seven minutes left.

Luton Town were in supreme form again at Kenilworth Road as they swept Bradford City aside convincingly 4-0. Elliott Lee scored twice again as he did at the weekend and the Hatters made it three wins on the spin, a run of games that’s seen them score 12 times.

Charlton Athletic produced an impressive comeback at Burton Albion to win 2-1 at the Pirelli Stadium. They scored twice in the second half to make it four wins in a row for the Addicks to keep their impressive run going and the pressure on the top two notched up. Peterborough United also won again as a second half wonder strike from Marcus Maddison sealed another big win for Posh.

Herbie Kane scored an absolute belter of a goal for Doncaster Rovers - his second in as many games - as they leapfrogged Blackpool in the table with an impressive 2-0 win at the Keepmoat Stadium. Doncaster are unbeaten in their last three league games and now sit just outside the play-off places on goal difference.

Wycombe Wanderers ended a run of 11 league games without a win over Accrington Stanley as they came from behind to win 2-1 at the Crown Ground. Substitute Scott Kashket scored with just 13 minutes left and an injury time strike from Alex Samuel sealed the win in dramatic fashion.

Fleetwood Town would probably be a contender for performance of the week as they ended a run of just one win in six games as they thumped play-off chasing Coventry City 3-0 at the Highbury Stadium. Joey Barton’s side made it five unbeaten at home despite their recent winless streak.

Oxford United won a goal fest at the Kassam Stadium with a convincing 4-2 win over Rochdale. A second half brace from Marcus Browne was enough to condem Dale to another defeat on the road and help the U’s stretch out a four point gap to the bottom four.

Elsewhere there was a big win for Gillingham who won away 2-1 at fellow strugglers Bristol Rovers. Despite being reduced to ten men with 20 minutes remaining and conceding with three minutes left, they clung on for a vital three points. 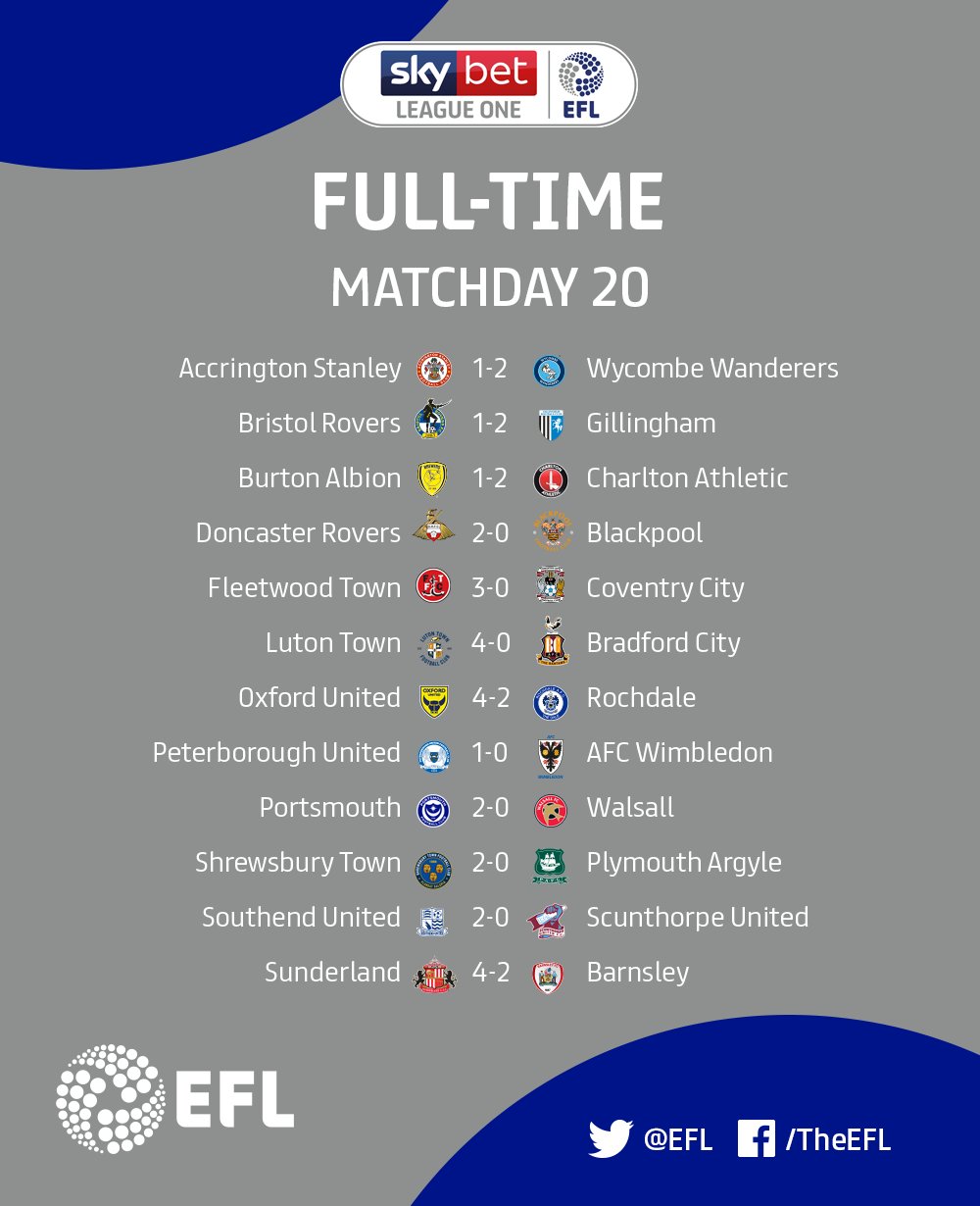 Sky Bet League Two also produced some moments of magic, more stunning games and dramatic comebacks with another load of goals – a whole 34 in total.

Despite an injury time defeat at the weekend to Stevenage, MK Dons are back at the top of the Sky Bet League Two table after they got back to winning ways with a comfortable 2-0 victory at Stadium MK. They lead the way by two points at the top after Lincoln City failed to beat 10 man Oldham Athletic at Boundary Park – they now haven’t won there in their last eight attempts, dating all the way back to 1949!

But the game of the night was at Blundell Park in an incredible match that produced seven goals as Grimsby’s secured their biggest win for over two years. The Mariners had five different goalscorers on a night they actually fell behind as James Norwood notched his 14thof the season. But first half goals were added to by three late second half strikes as they moved away from danger at the foot of the table.

Nicky Maynard scored a double as Bury notched another four goals at home as they thumped Cheltenham Town 4-1 at Gigg Lane to become the league’s top scorers this season. It meant the hosts had scored 13 in their last four home games – netting four goals on three of those occasions. The Shakers are now only two points outside the automatic play-off places.

Swindon Town won back to back matches under new manager Richie Wellens as they won a crazy game 3-2 at the County Ground – their first victory at home in the league since August.

Academy graduate Sol Pryce enjoyed a dream league debut with a brace as he scored after just 18 seconds and he added a second in first half stoppage time. Stevenage fought back in the second half, but the Robins clung on for another vital win.

Newport County got back to winning ways with an important 3-1 win over Northampton Town. All four goals were scored in a brilliant first half that ebbed and flowed until Jamile Matt's goal and Padraig Amond’s stunning strike inside two first half minutes were enough to send County back within just goal difference of the top three.

Elsewhere, Colchester United kept yet another league clean sheet as Sammie Szmodics scored his second goal in his many games and his eighth of the season to keep the U’s in the top three as they beat Forest Green Rovers 1-0.

Meanwhile, Cristian Montano was another player to score a double on matchday 20 as his Port Vale side picked up their first win on the road since October to send them up to 14th in the standings, winning 3-0 at Yeovil Town.

Shaun Miller scored a brilliant individual goal to get Crewe Alexandra back to winning ways, as they wobn 2-0 at Gresty Road. Macclesfield Town got a brilliant 1-0 away win at struggling Exeter City – the same day they announced Sol Campbell will be their new manager. 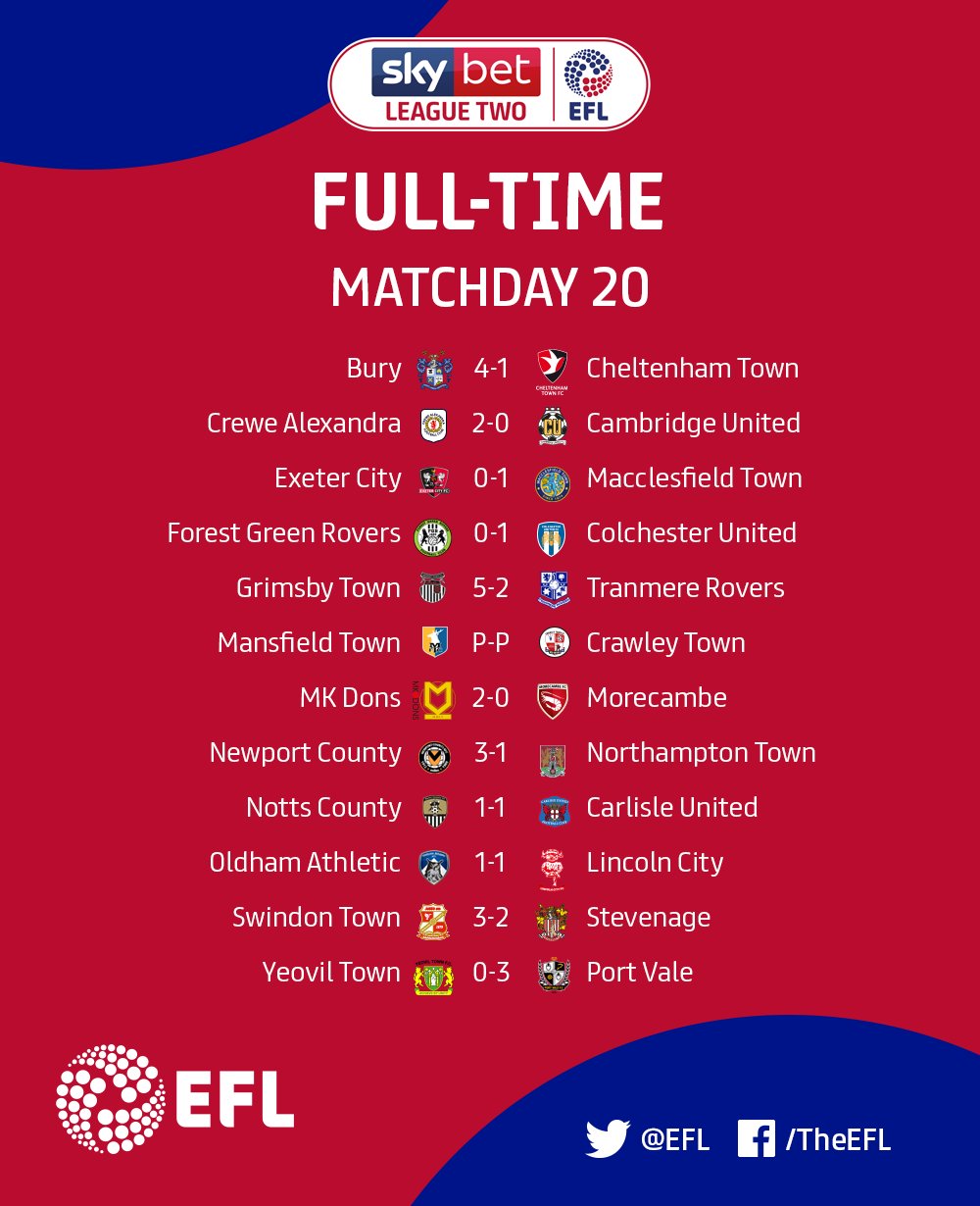