There was another brilliant couple of nights of midweek action in the Sky Bet Championship with drama across all the games. But one game stood out above the rest...

Tammy Abraham scored a first half hat-trick and added another in the second half, but his four goals weren’t enough to earn Aston Villa all three points in what was the game of the season so far at Villa Park as Aston Villa and Nottingham Forest drew 5-5 in a sensational encounter.

Lewis Grabban scored his second of the night late on and his 12th of the season to earn ten-man Forest a point before Villa had two goals disallowed in the closing stages. Forest were 2-0 up inside seven minutes with Grabban scoring his 11th of the season, before Villa pulled it back to 2-2 within 20 minutes thanks to Abraham. Forest once again took the lead before Abraham levelled from the spot.

In the second half, Joe Lolley rocketed a shot from outside the box to make it 4-3 to Forest. But only minutes later they were down to ten men when Tobias Figueiredo was sent off and it was a moment that turned the game on its head when Villa scored a fifth, when Anwar El-Ghazi struck with a brilliant strike. But Forest hung in there and earnt a point through Grabban's second of the evening.

Elsewhere on Wednesday, Paul Lambert’s Ipswich Town side couldn’t hold on to beat Bristol City as they twice took the lead only for the Robins to score three times in the second half to earn maximum points at Portman Road and stop the rot of four straight defeats. Paul Lambert’s side remain rooted to the bottom and without a win at home in 12 games.

Gary Rowett enjoyed a victorious renewal with Derby County as ten man Stoke City battled hard to beat Derby 2-1 at the Bet 365 Stadium. Harry Wilson had cancelled out Sam Clucas’ first half opener with another stunning free kick, only for another former Ram in Tom Ince to steal home midway through the half and poke in what proved to be the winner.

West Bromwich Albion staged a first half comeback at the Liberty Stadium as they won again to go within three points of Norwich City at the top of the table. Goals from Craig Dawson and Ahmed Hegazy were enough to give Darren Moore’s men maximum points for a third successive game.

Elsewhere on Wednesday night, Birmingham City bounced back from their second city derby defeat at Aston Villa to win comfortably 2-0 against ten-man Millwall to go in to the top half of the table. While Wigan condemned Blackburn Rovers to another defeat against their Lancashire rivals, as they ran out 3-1 winners at the DW Stadium.

Sheffield United won a cracker of a game at Griffin Park as they went fourth in the Sky Bet Championship with a vital away win. The league’s top goalscorer, Neal Maupay, scored yet again as he put the home side ahead in a manic nine-minute spell which included three goals as the Blades turned around a deficit to lead 2-1 by the half time mark.

John Fleck deflected the ball in to his own net and it looked like it may be even more dropped points om the road for the Blades but Leon Clarke had the final say when he scored with 18 minutes left to go and they hung on to send the travelling Utd fans home happy.

Leeds United went back in to the top two as Bailey Peacock-Farrell was the hero when he saved a second half penalty to secure all three points for the home side. It meant Stuart Dallas’ second half goal was enough to give Marco Bielsa’s side a crucial 1-0 win in their promotion push.

Middlesbrough couldn’t take all three points at Deepdale as Alex Neil’s side produced another impressive display to increase their unbeaten run to nine game and Norwich seven game winning streak ended at Hull City in a stalemate at the KC Stadium. The leaders remain a point clear at the top of the Sky Bet Championship.

QPR scored an injury time equaliser to deny Rotherham United all three points at the New York Stadium. Rotherham had led 2-1 after a crazy first 15 minutes of the game that featured three goals – including a cracker of a strike from Will Vaulks. The R’s looked like they were heading for defeat but Luke Freeman’s diving header right at the death was enough to clinch a point.

At Hillsborough, Sheffield Wednesday continued the misery for Bolton Wanderers fans, condemning them to yet another defeat as the Owls picked up a crucial 1-0 home victory to send them up to 14th. 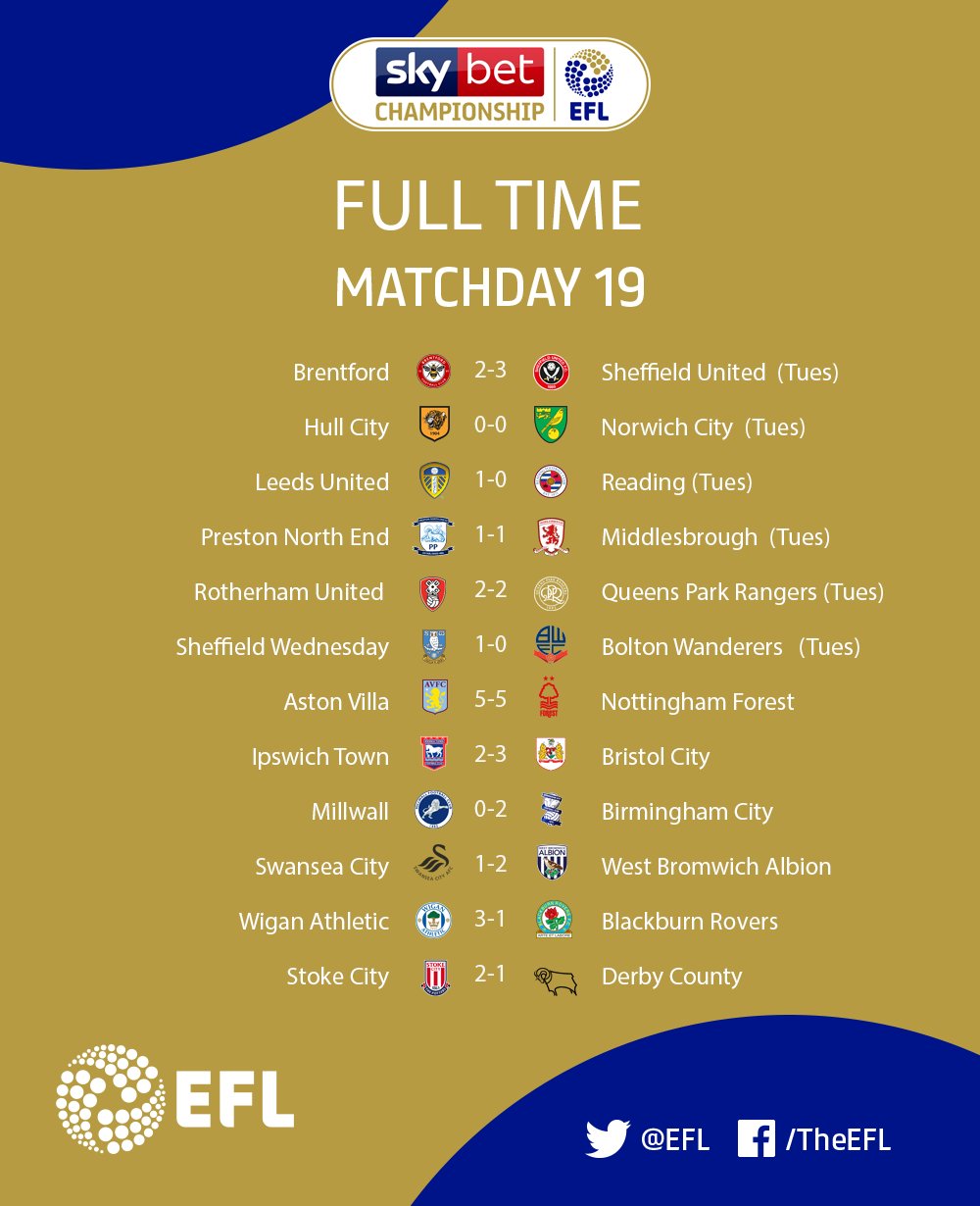