Yet again the action in all three divisions did not disappoint. Here's our review of all the action on a blockbuster weekend of football.

Aston Villa beat rivals Birmingham City 4-2 in what will go down as one of the most dramatic second city derbies in EFL history.

Villa fell behind when Lukas Jutkiewicz scored his 10th goal of the season to give the Blues the lead but goals from Jonathan Kodjia and Jack Grealish inside two first half minutes gave Villa the lead at the break.

The home side extended their lead when Tammy Abraham converted from the spot before Kristian Pedersen pulled one back for Birmingham, but unlikely scorer Alan Hutton secured the points with a sensational run and dribble past five men before slotting it in the corner in front of the Holte End. It was a fabulous game that put the icing on the cake of what had been another fabulous weekend of football across the EFL.

Norwich City won yet again on matchday 18, cruising to a 4-1 victory at Swansea City to win their sixth match in a row and go two points clear at the top of the Sky Bet Championship.

The Canaries were 3-0 to the good by the 37th minute at the Liberty Stadium and the second half was pretty much a procession for Daniel Farke’s side. It was the third consecutive occasion that Norwich had scored four goals in a game and the Yellows show no signs of their form waning.

Tony Pulis’ Middlesbrough side reduced the gap to the Canaries at the top to just two points in Saturday’s evening game, after an impressive second half performance saw them take maximum points with a 2-1 victory at Griffin Park against Brentford.

Boro scored two goals in five minutes early after the restart when Jordan Hugill grabbed his third goal in two games to break the deadlock, before a Marcus Tavernier header doubled their lead. The Bees scored with 15 minutes to go to set up a tense finale but Boro held on to secure a vital three points.

Leeds United beat Bristol City at Elland Road with a 2-0 victory courtesy of second half goals from Kemar Roofe and Pablo Hernandez after the Robins had been reduced to ten men early in the second half. But it was a comfortable win in the end for the home side who sit just a point behind Boro at the top.

Sheffield United were denied a victory right at the death against a plucky Rotherham United side in a brilliant game at the New York stadium. Chris Basham’s goal five minutes from the end looked to have secured all three points for the Blades, but Jamie Proctor’s stoppage time strike earnt a deserved draw for the Millers.

Frank Lampard’s Derby County side produced an impressive comeback against Sheffield Wednesday that keeps the Rams in contention for a promotion push. They fell behind early at Hillsborough but they cancelled out Adam’s Reach’s opener shortly afterwards through the impressive Harry Wilson. The Rams then had their in-form striker Jack Marriott to thank when he scored what proved to be the winner, netting his sixth goal in eight games.

The Lancashire derby saw Preston North End easily beat Blackburn Rovers with a convincing 4-1 victory at Deepdale. The win means it’s eight unbeaten now for Alex Neil’s side who have steadily moved themselves away from the relegation zone.

Nottingham Forest won 2-0 at Hull City with two goals inside three second half minutes to send them to within a point of the play-off places. Such is the scenario at the top end of the Sky Bet Championship, the Reds find themselves only four points behind Middlesbrough in second place. Goals from Lewis Grabban and Joe Lolley meant it was now just one defeat in 12 games for an ever improving Forest side.

Angel Rangel fired in a double for QPR as they shared the spoils with Stoke City in a 2-2 draw at the Britannia Stadium. Rangel opened the scoring just seven minutes in to the first half before Stoke hit back and stormed in to a 2-1 lead. But they were denied all three points when the R's right back scored his second of the game 12 minutes from time to keep recent run good run going.

Elsewhere on Saturday, it ended 1-1 between Millwall and Bolton at The Den and there was a stalemate between Wigan Athletic and Reading at the DW Stadium.

On Friday evening, West Bromwich Albion put in a convincing display to heap the misery on new Ipswich Town manager, Paul Lambert. The Baggies took all three points in a 2-1 win that keeps their promotion push alive. 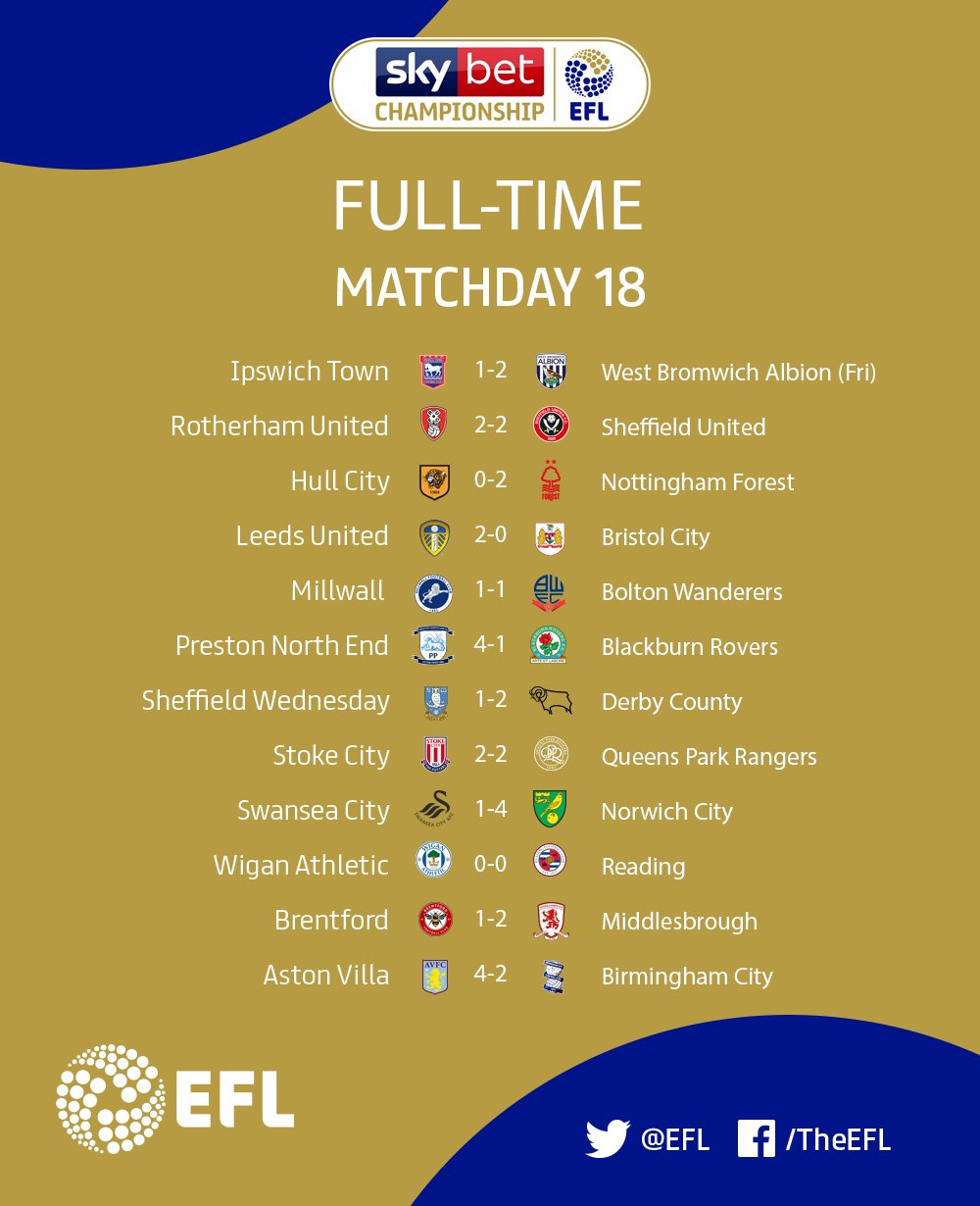 Ten-man Sunderland had to come from 2-0 down against Walsall to snatch a point late on at the Bescot Stadium. Max Power was sent off again for the Black Cats in the first half and Walsall scored two early second half goals and it looked like they would take all three points.

But Aiden McGeady’s 62nd minute goal gave Sunderland hope, before Lynden Gooch’s shot on the turn levelled it up with just a minute to go, to send the travelling Mackems in to ruptures in the away end.

Sunderland’s draw means that Portsmouth’s 2-1 victory away at Scunthorpe United increases their lead at the top of Sky Bet League One. It means Pompey have now won eight of the ten games on their travels. They have a four point advantage on the leading pack and their latest victory was a fairly routine one.

Having led 2-0 at half time, a Scunthorpe goal in the 62nd minute created what was a tense finish, but the leaders held on to head back south with three more points on the board.

At Oakwell, Barnsley fell further beind the leaders after a 1-1 draw against a plucky Doncaster Rovers. The visitors frustrated the Tykes for large periods of the match and were always a threat on the counter. They then took the lead through their star man, Herbie Kane, before Cauley Woodrow levelled it up for the hosts. Donny may have won it late on after Alfie May missed a golden chance, but both sides had to settle for a point.

Luton Town cruised to a 3-1 victory at Gillingham as they secured their seventh win in nine league games. It’s a run that has seen the Hatters go largely unnoticed by many on their march up the league standings but they now sit just two points outside the automatic promotion places. A second half brace from Elliott Lee and an Andrew Shinnie strike claimed all three points, despite Tom Eades scoring again late on for the Gills to increase his tally as the division’s top scorer.

Shrewsbury Town's awful record at Wycombe Wanderers continued after they lost 3-2 in a brilliant game at Adams Park. The Shrews have now only won once in their last 22 games against the Chairboys. It was a fifth consecutive home win for Wycombe who had to come from behind after Shrewsbury took an early lead, but they got the result they arguably deserved after an impressive comeback and despite a spirited Shresbury side scoring with just over 20 minutes to go, they held on for the win.

Charlton Athletic beat struggling Bristol Rovers 3-1 at the Valley to keep Lee Bowyer’s side right in the hunt for the play-off places. Despite levelling midway through the first period, Bristol conceded on the stroke of half time and couldn’t find a way back in to the game before the Addicks sealed all three points through Karlan Grant’s injury time strike.

Blackpool were another team who ran out comfortable winners, with a 3-0 victory over Burton Albion. The Seasiders scored three second half goals in 12 minutes after the restart and they now sit 7th , just one place below Charlton on goal difference.

AFC Wimbledon produced a brilliant second half display to come from behind to beat Southend 2-1 at Kingsmeadow. Despite falling behind early on, Deji Oshilaja scored just before the break after Mitch Pinnock set up him up. Pinnock then scored himself in the second half to complete Wimbledon's comeback and heap more misery on his former team.

Bradford City put in a fabulous display to beat Oxford United 2-0 at Valley Parade as they won at home for only the second time this season. The win was vital for the bottom placed Bantams who closed the gap to Oxford in 20th to just four points. 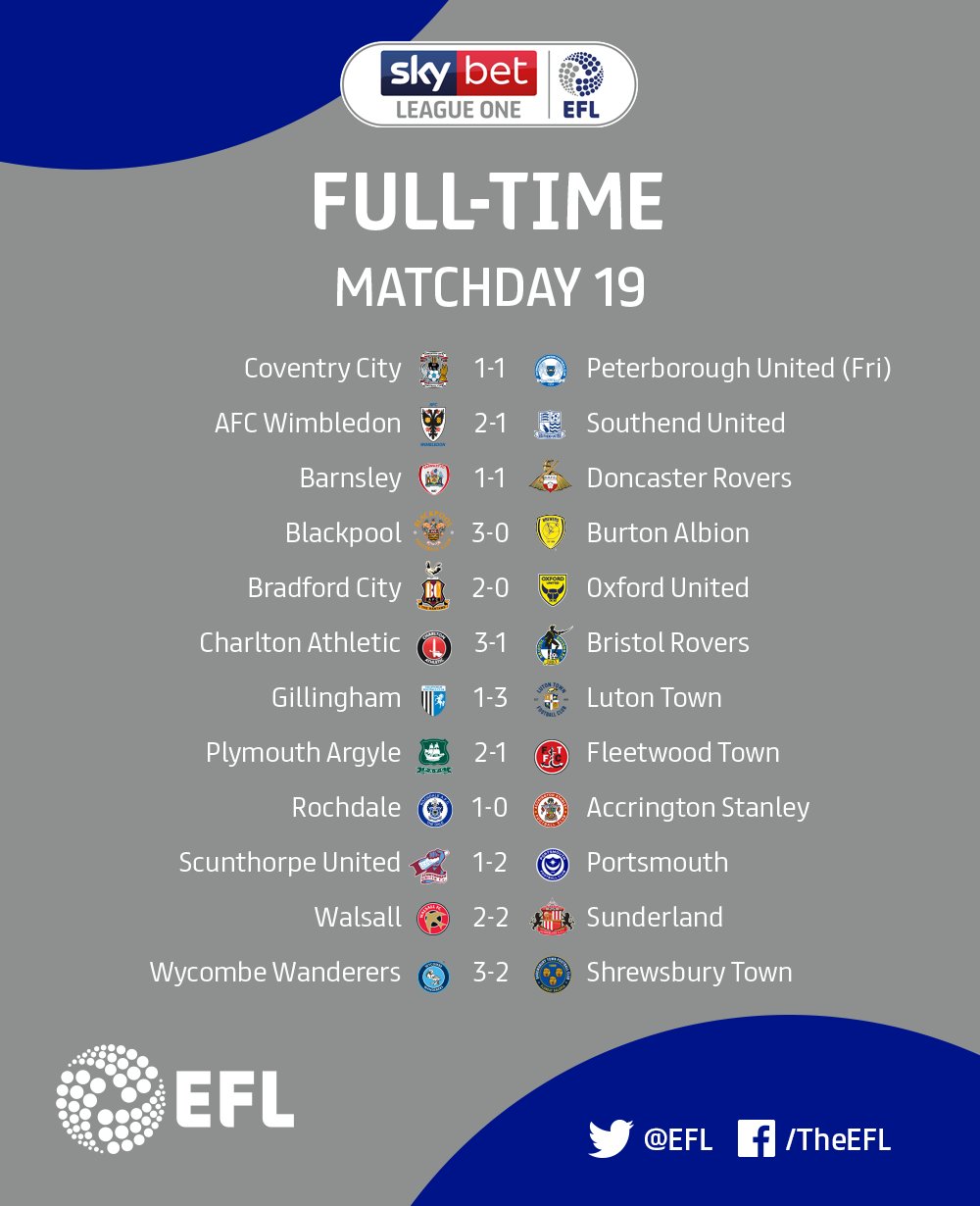 Last gasp drama at Broadhall Way saw Stevenage score two goals late on to deny MK Dons going top of the league. With five minutes remaining it looked like the Dons were heading to the top of the table, but Scott Cuthbert equalised with five minutes to go, before Ben Kennedy scored a brilliant free-kick in the last minute to complete a dramatic victory.

In the early kick-off there was drama at Sinci Bank, as Mansfield Town scored three minutes in to stoppage time to deny Lincoln City all three points. The Imps remain top of the table after MK Dons’ defeat but they themeslves scored with only five minutes left when super substitute Kellan Gorden had given them the lead before the Stags equaliser sealed a crucial away point.

Two of the other sides chasing promotion, Colchester United and Exeter City, had to settle for a share of the spoils at the Colchester Community Stadium. Sammie Szmodics' stunning strike was good enough to win any football match such was its quality but Jayden Stockley's ever predatory instincts saw him notch his 11th goal of the season and seal a point for the visitors.

Cheltenham Town won back to back league games for the first time in over a year as they secured an unlikely victory to beat promotion chasing Newport County 2-1 at Whaddon Road. They netted twice in the first half, courtesy of goals from Will Boyle and Tyrone Barnett and the win for the Robins means there is daylight for them at the bottom - they sit just two points above the relegation zone.

Cambridge United produced a brilliant comeback to draw 2-2 against Bury after Paul Lewis had scored and was later dismissed for two bookable offences. Trailing 2-1 from the first half after a quickfire double from Bury, Lewis' red card meant they had to play for the rest of the game with 10 men and it looked like too much up until the 86th minute when Greg Taylor thundered in an equaliser in dramatic fashion.

Morecambe were another side to score a late goal as they denied Notts County a vital win away from home, in a 1-1 draw at the Globe Arena. 39-year old veteran Kevin Ellison bundled in the equaliser with just two minutes left on the clock.

Grimsby Town twice came from behind to deny Northampton Town another victory under Keith Curle’s management, as the Mariners scored ten minutes from time to stop their recent run of three straight defeats on the road. It looked like the Cobblers had done enough but Harry Cardwell bundled in a late equaliser for a share of the spoils.

Crawley Town beat Crewe Alexandra 3-0 and with it ended a run of eight games without victory in Sky Bet League Two. The home side were able to see off second half Crewe pressure and they scored two goals in the last 10 minutes to seal the points.

Elsewhere, Swindon Town put in a brilliant backs to the wall display to win away 1-0 at Port Vale and secure a first win for new manager Richie Wellens.  Oldham Athletic also battled their way to a valuable point at Tranmere Rovers who had Conor Jennings to thank for earning them a share of the spoils at Prenton Park.

Meanwhile, Macclesfield Town won only their second home win of the season as they beat Oxford United 2-0 at Moss Rose. 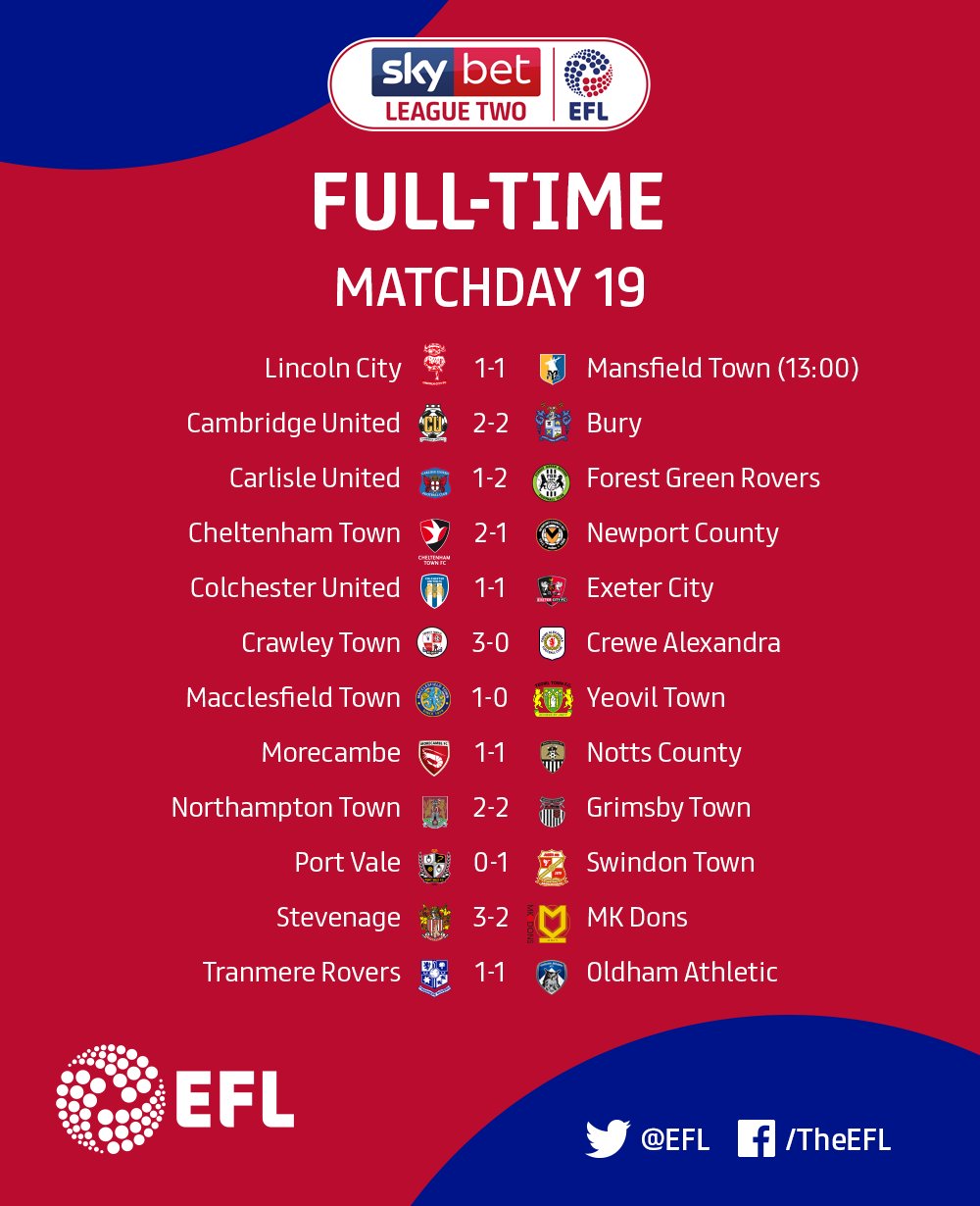