The Sky Bet Championship served up a Boxing Day feast of football, in what was arguably the most exciting finish to a matchday this season in the EFL.

Kemar Roofe struck twice in stoppage time to win his team their seventh consecutive league victory and send Leeds United three points clear at the top of the tree as they beat Blackburn Rovers 3-2 with virtually the last kick of the game.

It was the second time this week that Roofe has been the matchwinner, after his dramatic goal won Leeds the three points at Villa Park on Sunday. This time he took advantage of a goal mouth scramble when he prodded his team level in the 91st minute before converting a header and sending the Leeds fans in to pandemonium.

It had looked like Charlie Mulgrew’s superb long range free-kick, adding to his earlier opener, had been enough to give Rovers maximum points but it was Leeds’ late goals that lifted the roof of Elland Road.

And if that wasn’t enough for late drama and fireworks, the action at Carrow Road was once again quite unbelievable as Norwich City somehow managed to claw themselves from 3-0 down to earn a point in a 3-3 thriller with Nottingham Forest and extend their unbeaten run to 12 games.

With just 14 minutes left to play, the Canaries were trailing 3-0 after a brace from Matty Cash and another from Jack Robinson had given Forest what looked like an unassailable lead.

But when Mario Vrancic's deflected shot made it 3-1 after 77 minutes, it gave the yellows a lifeline. Onel Hernandez then made it 3-2 in the fourth minute of stoppage time and with the clock ticking over the allocated minutes added on, it looked like they might just fall short before Hernandez struck again to send Carrow Road wild.

Elsewhere, third placed West Bromwich Albion reduced the gap to Norwich to just three points after they comfortably beat Wigan 2-0 at the Hawthorns thanks to a double from Jay Rodriguez. His second was something to savour and his brace meant Albion have scored in every one of their home matches in 2018.

Sheffield United moved above Derby County and Middlesbrough in the table and now sit 4th after a highly impressive 3-1 victory over the Rams at Bramall Lane. Billy Sharpe had given the Blades the lead before another stunning free-kick from Harry Wilson had levelled things up. But goals from David McGoldrick and substitute Leon Clarke were enough to give Chris Wilder’s team a vital three points.

At the bottom end of the Sky Bet Championship, there were some significant results. There was another impressive Hull City performance, as they won three games on the bounce, beating Preston North End 2-1 at Deepdale - the Tigers are now up to 15th in the table.

Milwall’s 1-0 victory over Reading was their first in eight matches and lifted them out of the relegation zone, while Bolton Wanderers ended a 13 match wait for a victory as they beat fellow strugglers Rotherham United 2-1 at the University of Bolton Stadium. Wanderers are now just a point behind the Millers and safety.

Elsewhere, Birmingham City put in an impressive display against Stoke City as they won 2-0 at St. Andrerws to help Garry Monk’s men to within just two points of a play-off place. Middlesbrough sit just two points above the Blues in 5th after they suffered their third defeat in five matches at home to managerless Sheffield Wednesday, losing 1-0.

Neil Maupay bagged his 15th league goal of the season as Brentford earnt a hard fought point at Bristol City, while there was a comfortable 3-0 win for QPR over Ipswich Town and Aston Villa got back to winning ways with a resolute display to win 1-0 at Swansea City. 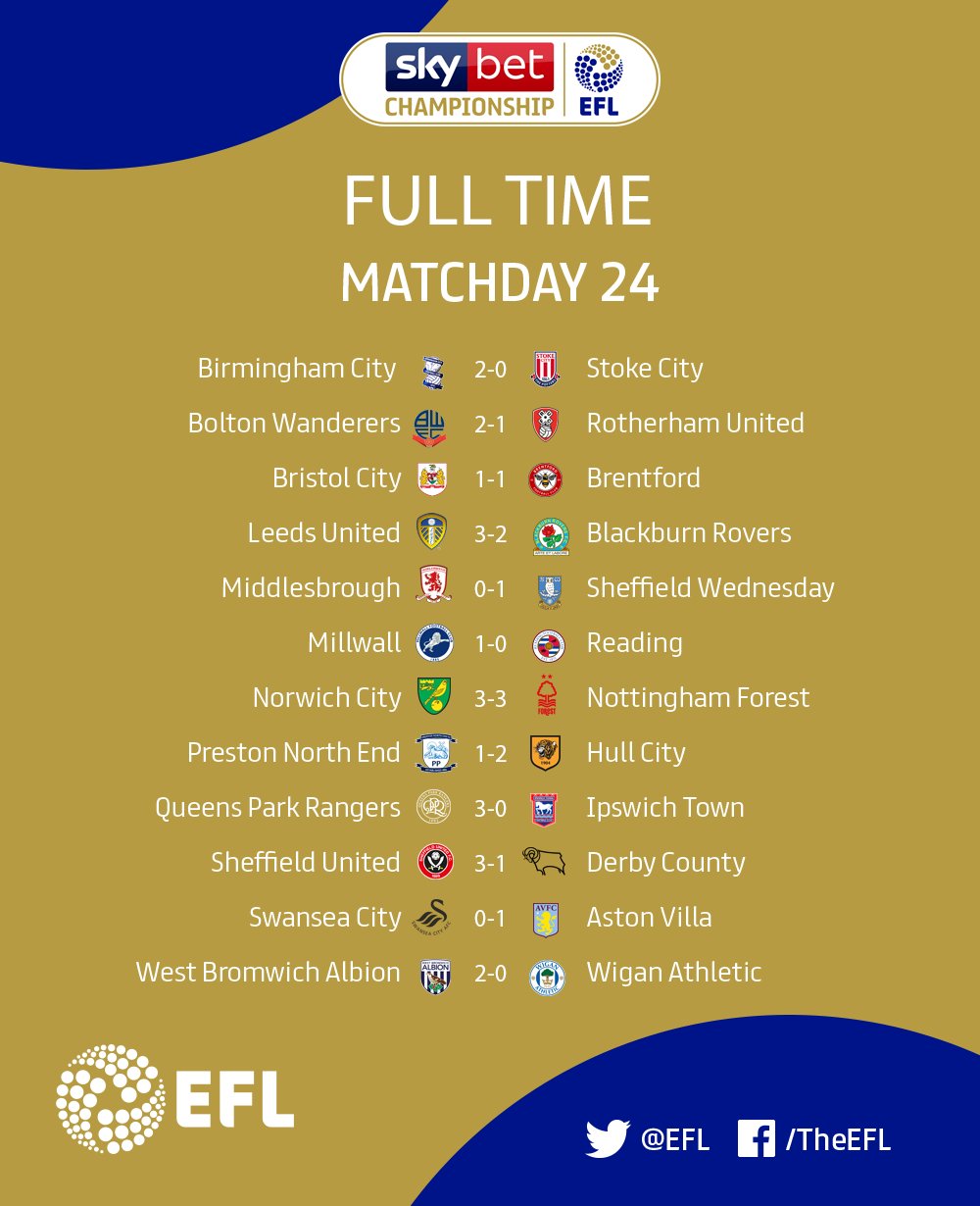 English football’s third biggest crowd on Boxing Day, witnessed Sunderland get back to winning ways in Sky Bet League One with a 1-0 win over battling Bradford City at the Stadium of Light.

46,039 people attended the game, a new record for this division, and they watched on as Aiden McGeady’s first half goal was enough to secure all three points for the Black Cats. They now sit just five points behind leaders Portsmouth, but with two games in hand.

Portsmouth went to Gillingham in the early kick-off and perhaps needed longer to let the Christmas turkey settle, as they went down 2-0 at the Priestfield Stadium. It was just the fourth defeat this season for Pompey but the second against the Gills, who recorded a league double having won the reverse fixture in October.

The defeat for the table toppers left the door open for Luton Town and it was one they did not miss as they recorded their seventh straight league win with a 2-0 victory at Scunthorpe United. It’s their best league run since 1977 and the Hatters sit just a point off the top.

Tom Bayliss secured a winner two minutes from the end for Coventry City to end their winless run and inflict just a second defeat in ten games on promotion chasing Charlton Athletic. Fleetwood Town are unbeaten at home in their last seven games and they extended their run, putting in an excellent display to beat in-form Doncaster Rovers 3-0 at Highbury.

Barnsley beat fellow play-off chasers Peterborough United 2-0 at Oakwell to move above them and Doncaster and in to 5th place. Elsewhere, there were just 106 seconds between Lucas Akins’ equaliser for Burton Albion and David Templeton giving the Brewers the lead against Wycombe Wanderers as they won 3-1 at the Pirelli Stadium.

Oxford United lost for just the second time in 17 league matches as Southend United ended a run of four straight defeats away from home, with a 1-0 victory at the Kassam Stadium. There was another late goal for Rochdale who had to battle for victory against ten-man Blackpool at Spotland. The home side scored with just a minute to go after the Seasiders thought they had salvaged a point. But it was Dale’s veteran striker, Ian Henderson, who notched his 13th of the season to give them a crucial three points.

At the bottom, there is now just three points separating the bottom five teams in what is shaping up to be a fascinating battle to stay up. Bristol Rovers recorded a second successive league victory as they won 3-1 at Walsall to move out of the relegation zone after Bradford’s defeat.

AFC Wimbledon produced an impressive turn-around to win 2-1 against fellow strugglers Plymouth Argyle, to move above their visitors and are now just two points from safety. Elsewhere, Accrington also won back to back matches after a 2-1 win against Shrewsbury Town. 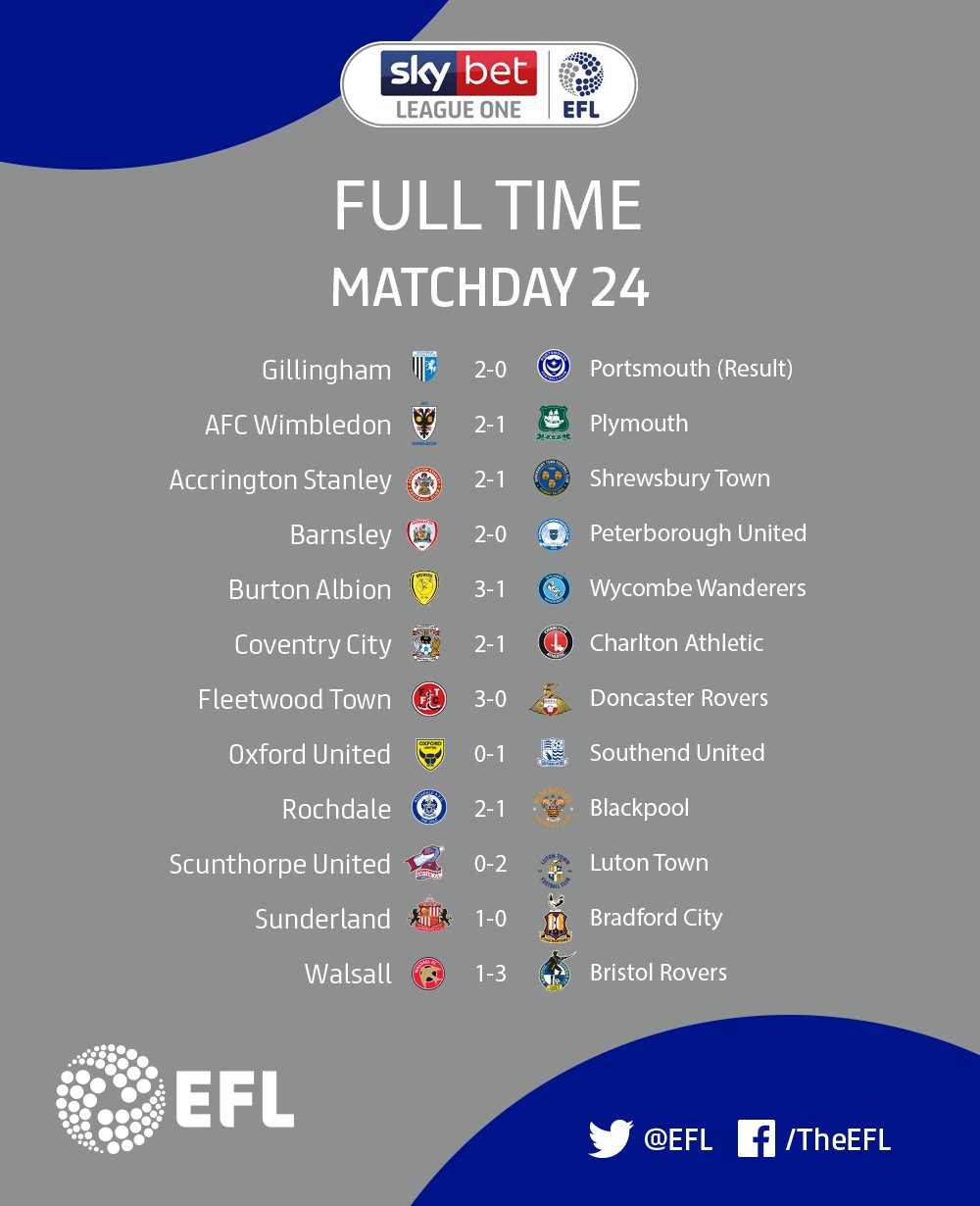 There was an amazing 40 goals scored on a boxing day Bonanza in Sky Bet League Two, full of twists and turns and last minute drama.

Carlisle United won three consecutive games as they demolished Oldham Athletic 6-0 at Brunton Park. The Blues have now scored 13 goals in their last three outings and sit just three points outside the play-off places after their recent run.

It was a day the home crowd won’t forget in a hurry as goals from Hallam Hope and Jerry Yates saw them in to a 2-0 half time lead and they added four more in the second half with strikes from Ashley Nadesan, Danny Grainger, Gary Liddle and another for Yates.

Mansfield Town burst into the top three of League Two for the first time this season after a dominant second half helped them beat promotion rivals Bury. The Stags are now unbeaten in their last 15 matches and they were the better side again here.

Colchester United's automatic promotion hopes suffered a blow though, after they were beaten at home by Stevenage, who claimed a first away win since October. George Williams hit a superb hat-trick for Forest Green Rovers as they won their third match on the bounce, convincingly beating Newport County 4-1.

Jayden Stockley struck his 15th goal of the season with two minutes remaining to earn a 2-1 win for Exeter City over West Country neighbours Yeovil Town. The Grecians now sit just a point behind the automatic promotion places, with only two points separating 7th and 3rd place.

James Norwood is one ahed of Stockley in the goalscoring rankings after he notched his 16th of the season helping Tranmere Rovers to another league win at home as they beat Morecambe 3-1 at Prenton Park.

Elsewhere, Cambridge United won 2-1 at Crawley Town and Northampton Town played out a 1-1 draw with Swindon Town at Sixfields. Grimsby Town also secured themselves three points, winning 1-0 at Port Vale, to move above them in the league standings. 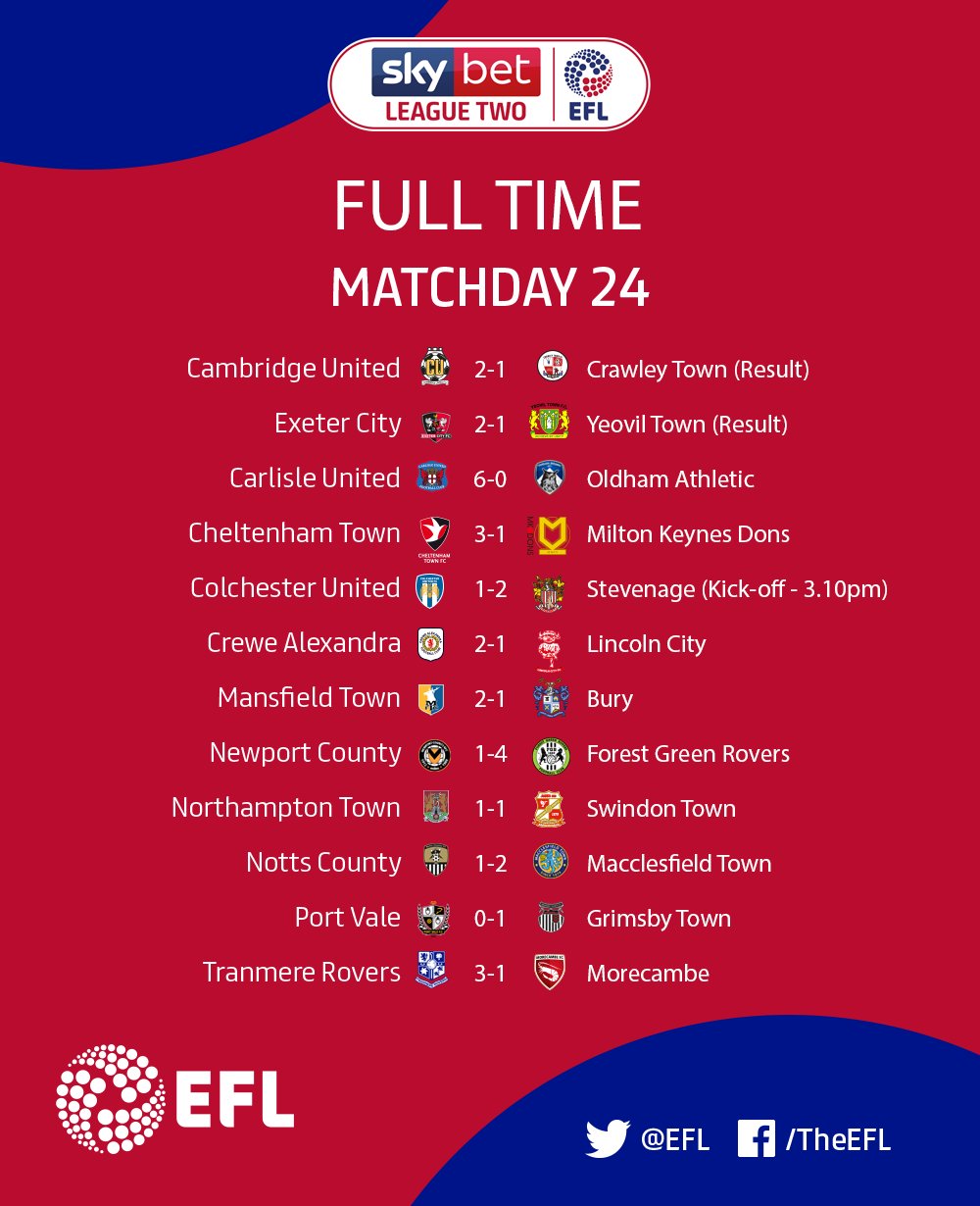