Leeds United are the new leaders of the Sky Bet Championship after another brilliant round of games on Matchday 22.

The East Midlands derby between Derby County and Nottingham Forest brought matchday 22 to a close on Monday night in a tight and cagey affair at Pride Park. Derby had looked the closest to taking the lead in the first half but Forest went closest in the second period when Joe Lolley hit the crossbar late on. But neither side could find a way through late on as the defences came out on top.

Leeds' win at Bolton Wanderers on Saturday afternoon was their fifth straight league victory and it came courtesy of substitute Patrick Bamford. The striker scored on his return from injury to give Leeds the maximum points they needed to secure top spot and they now have a one-point lead over Norwich City and a gap of six points to West Bromwich Albion in 3rd.

Norwich City could only manage a point away at Bristol City, scoring late on with Max Aarons’ late leveller in a 2-2 draw at Ashton Gate. It had looked like the Canaries may have been on course to go back top of the pile after Marco Stiepermann's excellent opener, but the Robins responded brilliantly to equalise on the stroke of half-time before taking the lead early in the second period to set up a fascainating finish. But Aaron’s goal was enough for Norwich to earn what might be a big point in their title challenge.

Gareth Barry rolled back the years on Friday night, inspiring his West Brom team mates to come from behind and take all three points in a 2-1 win at Bramall Lane. Barry cancelled out the Blades’ first half opener with a well taken finish, before Albion secured all three points in the second half after unlikely goal scorer Kieran Gibbs finished off a well worked team goal.

Birmingham City mounted a brilliant comeback at Blackburn Rovers on Saturday to earn a 2-2 draw at Ewood Park. Danny Graham and Adam Armstrong both scored for Rovers to open up a 2-0 lead, but with 12 minutes to go, Craig Gardner converted from the penalty sport and Che Adams close range strike minutes later, earned the Blues a point.

There was another brilliant game at Villa Park as Aston Villa and Stoke City had to settle for a share of the spoils. Stoke twice led in the second half with goals from Joe Allen and Benik Afobe’s penalty. But they were pegged back both times by Villa with Tammy Abraham scoring his 12th of the season from the spot and substitute Jonathan Kodjia netting with six minutes left, to extend Villa’s unbeaten league run to seven games.

Steve McClaren enjoyed victory over his former employers Middlesbrough as QPR won 2-1 at Loftus Road. The R’s are now just six points from a play-off place as they won for the first time in four games. After the home side had led at half time, Boro equalised courtesy of a sweetly struck George Saville volley. But it wasn’t enough as Nahki Wells scored ten minutes later to help earn QPR maximum points.

Millwall’s miserable away run continued as they lost 3-2 at Preston North End, the home side continuing what has been an excellent recent run at Deepdale. The Lilywhites scored twice in five first-half minutes – Alan Browne netting his fifth of the season - and they were in control thereafter and despite Millwall scoring late on, it wasn’t enough.

Fraizer Campbell scored twice as Hull City heaped more misery on Brentford by winning 2-0 at the KCOM Stadium. Campbell’s first half strikes inside the first 20 minutes were enough to seal the points and move Hull up to 17th, while Brentford have only one once in ten games and sit just three points adrift of the relegation places.

Elsewhere, Paul Lambert saw his Ipswich Town side win for the first time as the Tractor Boys recorded only their second win in 20 games, beating Wigan 1-0 at Portman Road. There was also a big win for Swansea City who had to come from behind to beat Sheffield Wednesday 2-1 and Rotherham United prevented Reading taking all three points at the New York Stadium when they scored in the 90th minute to earn themselves a 1-1 draw. 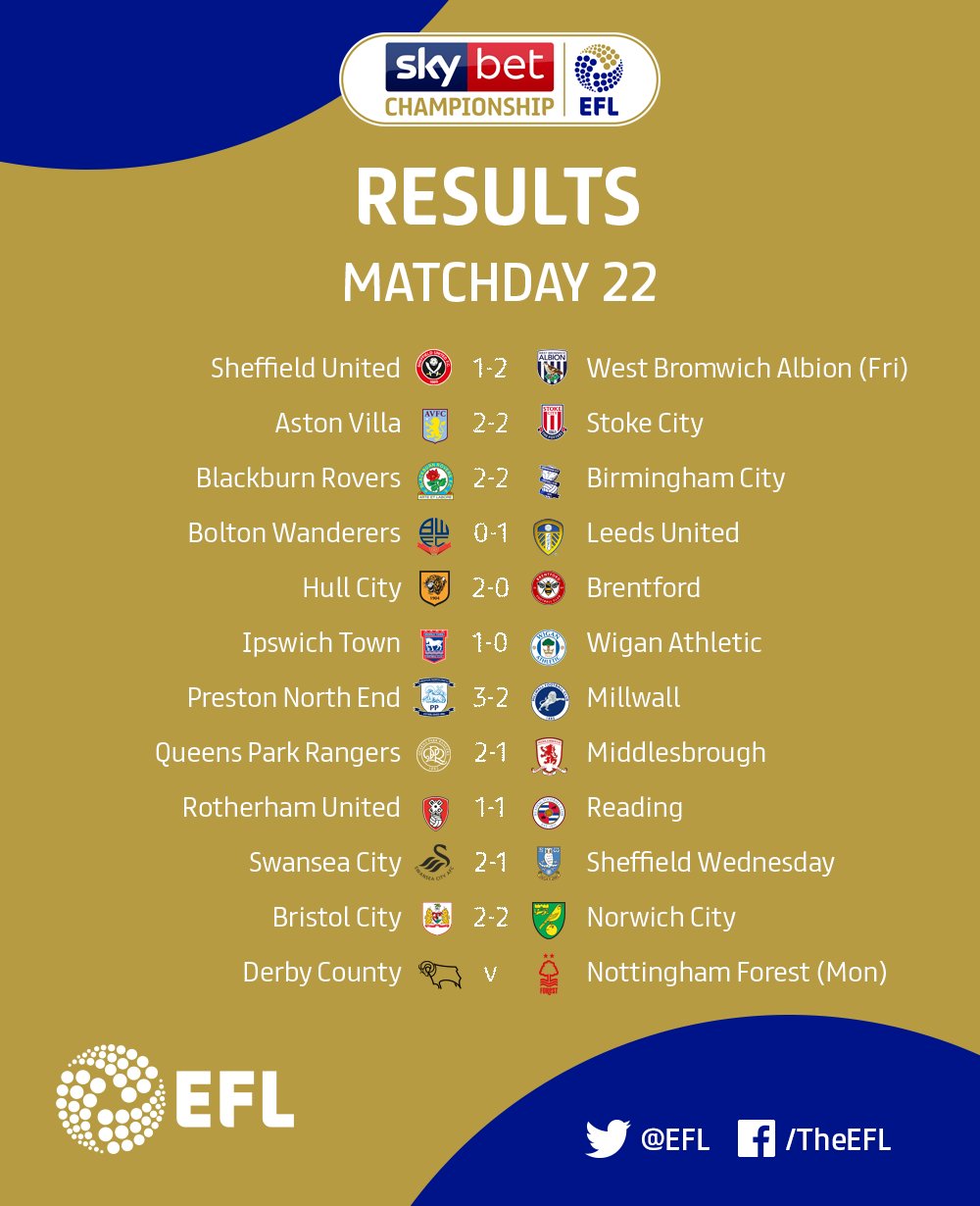 Doncaster Rovers earned a fourth consecutive win with a routine 3-0 victory over local rivals Scunthorpe United at the Keepmoat Stadium. Grant McCann’s side have been in great form of late and their latest win, including Herbie Kane’s third goal in four games, was enough to move them up to sixth in the table.

Barnsley have fallen out of the play-off places after they drew 1-1 with leaders Portsmouth at Oakwell. The draw means Pompey are still unbeaten away from home all season and lead the division by four points.

Luton Town sit in second place after the Hatters won their sixth straight league game with a 2-1 victory against Coventry City at the Ricoh Arena. Goals from Matthew Pearson and James Collins ensured a sixth successive league success for Nathan Jones' high-flyers, whilst Coventry's winless run now stretches to six league games, after winning five in a row beforehand.

Third placed Sunderland though have two games in hand on the front runners and face Portsmouth next week at Fratton Park. They continued their record of being the only EFL side to have scored in every league game this season, as they came from behind to beat managerless Bristol Rovers 2-1 at the Stadium of Light. Adam Matthews scored on the stroke of half time and Josh Maja scored four minutes in to the second period to seal the points.

Goals from Lyle Taylor and Mark Marshall earned Charlton Athletic a 2-0 win over AFC Wimbledon, as both sides played out most the match with ten players in a feisty affair at the Valley. The win for the home side means it’s six wins in seven games for Lee Bowyer’s impressive Addicks side.

Peterborough United struck a late equaliser to earn themselves a point in a 2-2 draw at Shrewsbury Town. The hosts had twice led thanks to goals from Greg Docherty and Fejiri Okenabirhie, but Posh hit back through Matt Godden and then Rhys Bennett's strike two minutes in to stoppage time earnt them a share of the spoils.

In-form Oxford United put a dent in Blackpool's play-off aspirations with a 2-0 win over the Seasiders at the Kassam Stadium. Karl Robinson’s side moved five points clear of danger at the bottom of the table after goals from Marcus Browne and James Henry, who scored hus 11th of the season.

David Ball scored twice for Bradford City inside nine second-half minutes as the Bantams moved off the bottom of the table with a 4-0 thrashing of Walsall at Valley Parade. It means they’ve lost once in six games and are now just three points from safety.

Elsewhere, Rochdale have been dragged in to the relegation battle after Plymouth Argyle secured a vital 2-1 win at Spotland in their own survival battle. Gillingham’s Tom Eaves scored again as the Gills fought back from 2-0 down to earn themselves a draw against Wycombe Wanderers.

Southend United were comfortable 3-0 winners over Accrington Stanley at Roots Hall and Joey Barton’s Fleetwood Town side enjoyed a -0 win over Burton Albion. 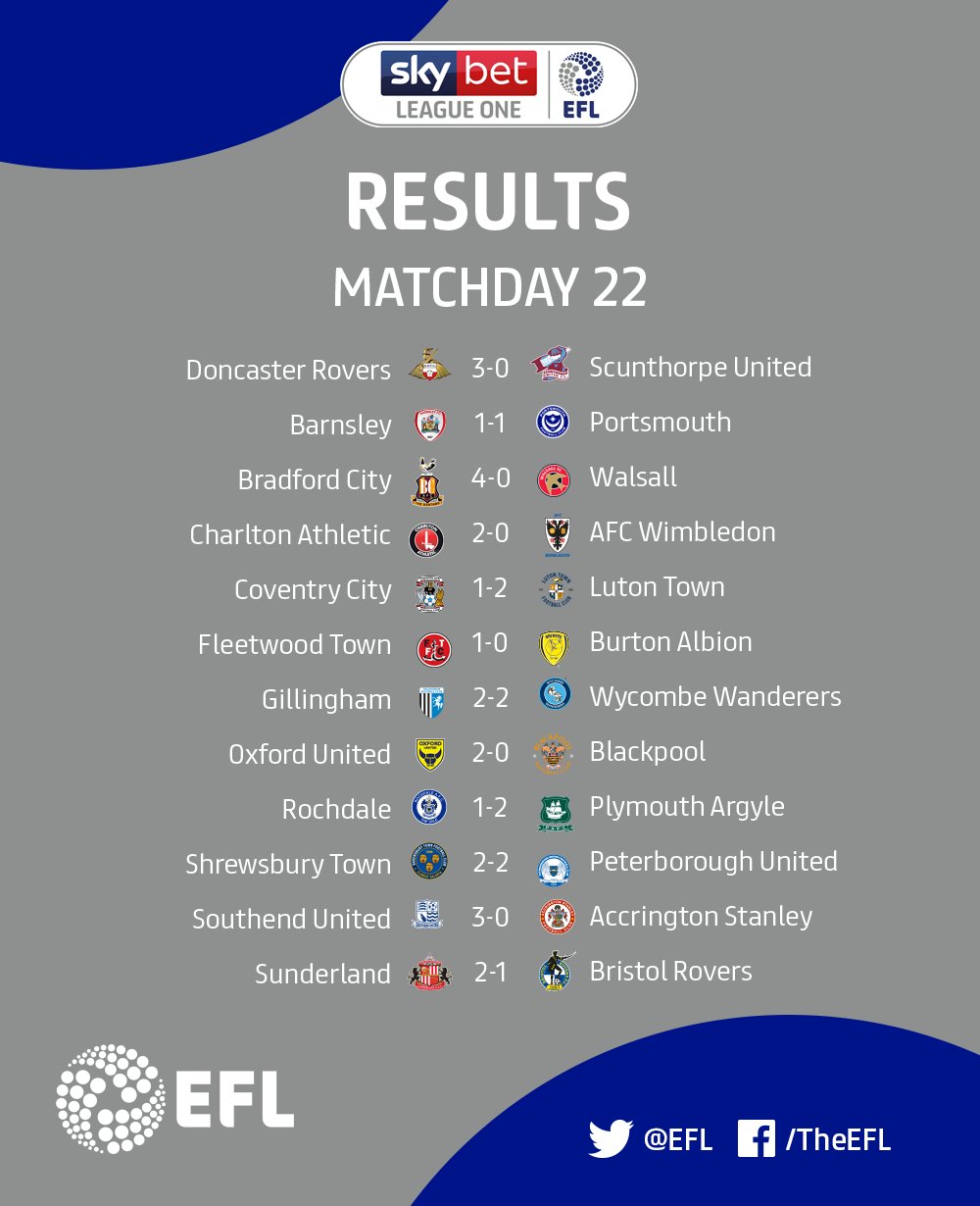 The game of the weekend came in the game at Boundary Park where Chris O'Grady scored a superb hat-trick to help steer Oldham Athletic to a 4-2 victory over local rivals Bury, in a pulsating north-west derby.

Oldham raced in to a 3-0 lead before half time and Bury looked dead and buried until substitute Caolan Lavery came on and scored twice to set up an intriguing last half an hour. But it was Oldham who put the icing on their Christmas cake, when O’Grady headed home and sealed all three points for the Latics to send their fans home happy.

After MK Don’s game at Newport County was called off due to a waterlogged pitch, Lincoln City went back to the top of Sky Bet League Two with a comfortable win over Morecambe at Sincil Bank. It was the time the Imps had recorded back to back wins since September and they were 3-0 to the good before half time. It proved too much for Morecambe, despite an 80th minute consolation made it 3-1.

3rd placed Colchester United were thrashed 4-0 by Carlisle United in what was a shock result of the weekend at Brunton Park. The Blues led at half time courtesy of Hallam Hope’s first half strike and they scored three more in the second period to seal a thumping win.

There was a dramatic finish at Vale Park where Antony Kay scored an injury-time header to help rescue a point for Port Vale in a 2-2 draw with Cheltenham Town. It looked as though Cheltenham were heading for another win in their recent resurgence when Nigel Atangana steered in a low drive, but Kay had the final say to help earn Vale a draw.

1,362 fans watched on as Sol Campbell oversaw his first win in charge of Macclesfield Town as they beat Crawley Town 2-0 at Moss Rose. It was their third victory in four games and Campbell’s side have a realistic chance of survival, and are just four points from safety.

However, they weren’t the only side at the bottom to get a crucial win as Jon Stead made himself the Notts County’s hero, scoring a brace to help them earn just their first league win since October, as the home side beat Tranmere Rovers 3-2 at Meadow Lane.

Elsewhere, Wes Thomas scored two goals for Grimsby Town in a 2-1 victory over Swindon Town and Lee Martin produced a moment of magic for for Exeter City to help them pick up their first win in Sky Bet League Two since mid-October as they secured a 1-0 victory over Crewe Alexandra.

In the other two games of the day, Northampton Town could only draw 1-1 with Stevenage at Sixfields and it ended 0-0 between Cambridge United and Yeovil Town. 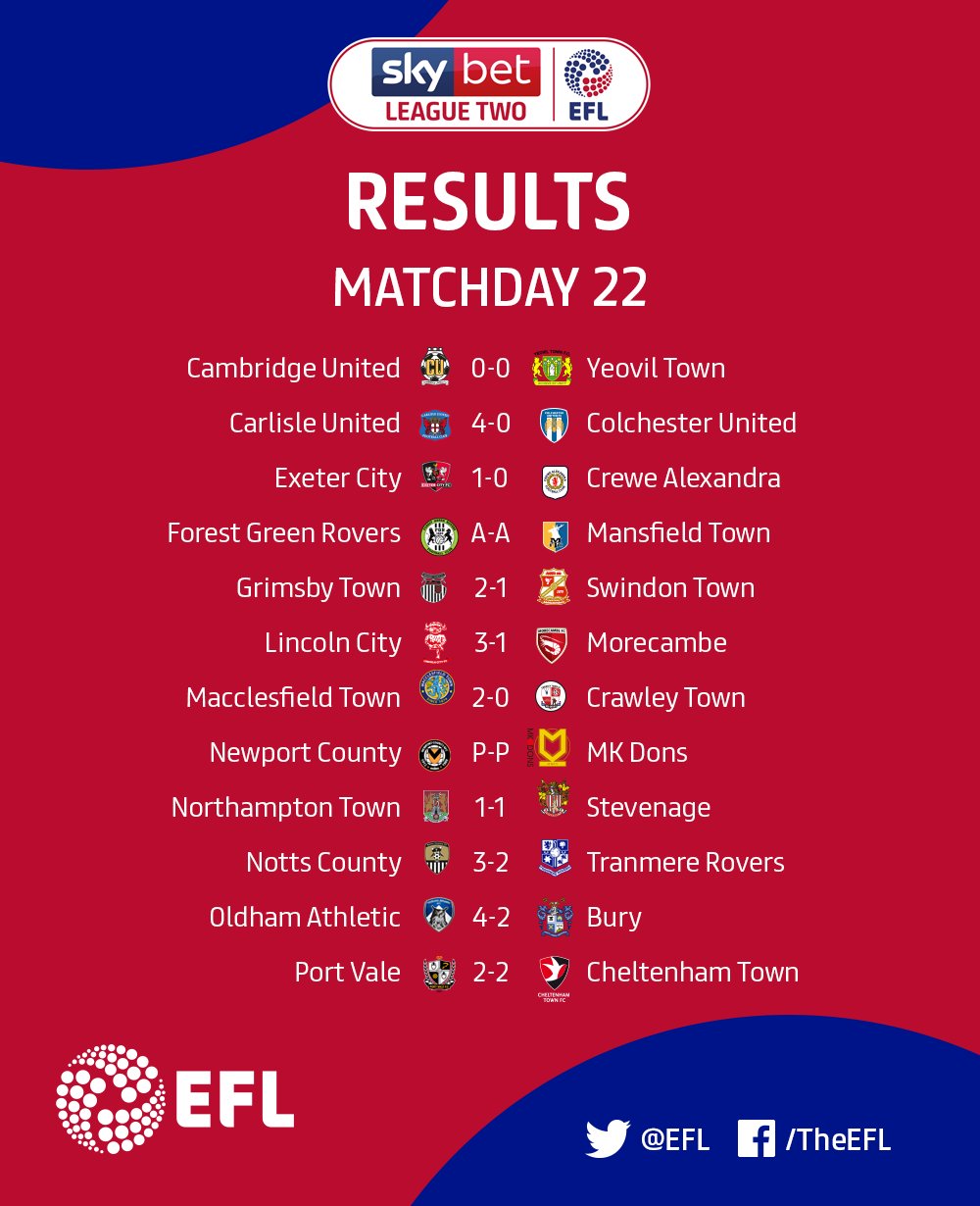