It was another sensational day across the EFL with late drama in every league.

The Sky Bet Championship produced a festive frenzy of goals with blockbuster action everywhere you looked.

Norwich City left it until stoppage time to beat ten-man Bolton Wanderers 3-2 at Carrow Road. It looked as though the visitors had earned a hard-fought point they arguably deserved, before Teemu Pukki scored his 11th league goal of the season to win in the most dramatic fashion. Wanderers had scored with only two minutes to go after being 2-0 down and they thought they’d done enough before Pukki popped up with another late winner to keep Norwich top of the pile.

Leeds United had to come from behind to beat QPR 2-1 at Elland Road as Kemar Roofe scored his seventh and eighth goals of the season to seal the win. Roofe pulled the hosts level deep in to first half stoppage time and converted a second half penalty-kick to earn Leeds their fourth win on the bounce – they remain just two points nehind Norwich City.

Swansea City held on to win 3-2 against Brentford at Griffin Park as they won away for just the second time since 1 September. The Swans had to hold resolute at the end after Brentford scored a second late on after having found themselves 3-0 down in the first half an hour. But in a crazy game, it was yet another defeat for the Bees, who have dropped to 18th and sit just three points from safety.

Jack Marriott’s eighth league goal of the season was enough to give Frank Lampard’s Derby County the three points against Wigan Athletic as they won 1-0 at the DW Stadium. Marriott scored a first half goal that proved enough to send the Rams up in to the play-off places and they sit in fourth place.

There was a share of the spoils for Millwall and Hull City at The Den. The Tigers took a first half lead but found themselves behind before they grabbed an equaliser with just 17 minutes to go. Elsewhere, Middlesbrough’s 10 men couldn’t find a winning goal at the Riverside despite Britt Assombalonga’s goal earning them a point against Blackburn Rovers. Rovers will be disappointed not to have held on after taking the lead through a brilliant Charlie Mulgrew free-kick.

Sheffield Wednesday still couldn’t win at Hillsborough after seeing out a 2-2 draw with Rotherham United. The Owls’ Lucas Joao scored twice to earn them a point and despite scoring in the first half to lead at the break, it was the Millers who scored twice in ten minutes to turn the game on its head, before Joao struck with his second of the day to earn Wednesday a point.

There was a surprising 1-0 defeat for Nottingham Forest at home to Preston North End. Forest now find themselves outside the play-off places after Sheffield United won late on with two goals at Reading and are in to 3rd spot. Billy Sharp netted his 11th of the season for Chris Wilder's side and a Sam Baddock own goal was enough to earn the Blades all three points.

On Friday night, West Bromwich Albion scored a controversial injury time equaliser to deny Aston Villa all three points in a 2-2 draw at the Hawthorns under the lights. 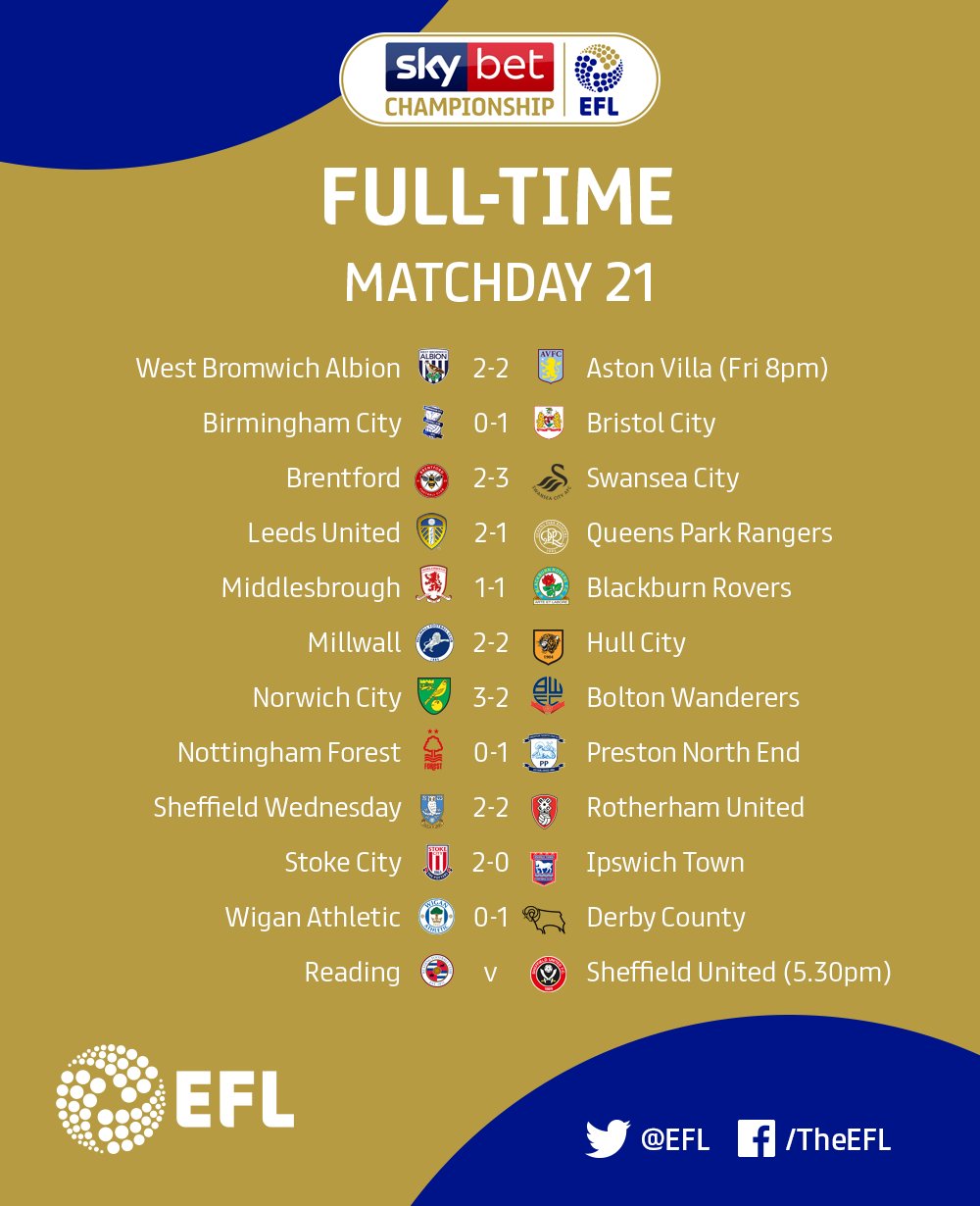 It wasn’t just the Sky Bet Championship that produced an afternoon of drama as Sky Bet League One saw a flurry of late goals and comebacks on another brilliant day of action.

Portsmouth extended their lead at the top to six points with a routine win over Southend United at Fratton Park. The leaders never looked in trouble as two first half goals from Pompey secured them all three points.

Walsall produced a sensational finish at the Bescot Stadium to beat midlands rivals, Coventry City 2-1. The home side looked as if they were heading for defeat against the Sky Blues as the game went beyond the 90 minutes. But Luke Leahy scored in stoppage time and then crazily, just moments later, Walsall were awarded a penalty which Leahy stepped up to convert and send the home fans crazy.

Doncaster Rovers steamrollered lowly Bristol Rovers 4-0 to move themselves in to the play-off positions. Rovers were in supreme form and won their third consecutive game thanks to a brace from Mallik Wilks and goals from Tom Anderson and John Marquis - a thunderbolt of a strike from 30 yards.

Blackpool beat Charlton Athletic 2-1 at Bloomfield Road thanks to a late Nathan Delfouneso strike with three minutes to go. It was enough to record a dramatic win for the Seasiders and condemn Lee Bowyer’s side to defeat after four straight league wins.

Luton Town kept up their red-hot form with another routine win and clean sheet against Joey Barton’s Fleetwood Town. The visitors have now lost five straight league games on the road, while the Hatters move up to third in the Sky Bet League One standings.

There was a sensational game at Home Park as Bradford City could only draw 3-3 with Plymouth Argyle despite having led three times in a crazy game. But the Bantams couldn’t hold off a resilient Plymouth. Jack Payne scored twice for the visitors but Freddie Ladapo did the same for Argyle, in a game that produced some fine individual performances.

Oxford United earnt themselves a vital point at London Road against Peterborough United, as James Henry converted an injury time penalty in a 1-1 draw. Siriki Dembele looked to have won it for Posh with ten minutes left but the late goal for the U’s may prove vital in their bid to stay up.

The thunderous rain at Accrington Stanley meant the action was called off as the home side entertained Sunderland. 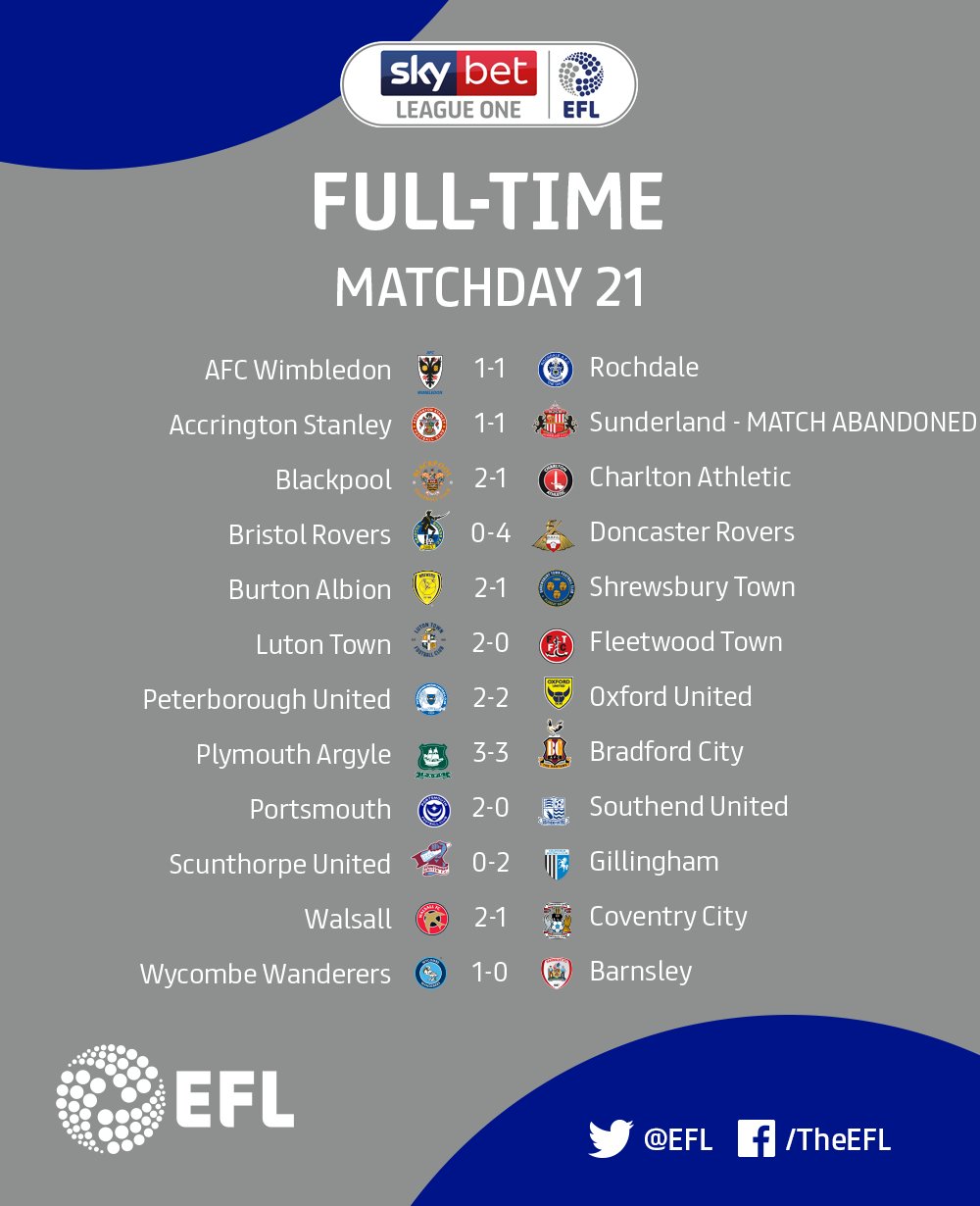 Sky Bet League Two had everything on another fabulous day of football.

MK Dons are still unbeaten in Sky Bet League Two this season as they won again with a convincing 2-0 victory over Carlisle United. Kieran Agard scored his eighth league goal of the season to seal the points as the Dons kept up their two-point advantage at the top of the standings.

John Akinde's penalty was enough for second place Lincoln City to return to winning ways and edge out Stevenage 1-0. Akinde’s eight of the season means that the Imps remain just two points behind MK at the top.

The best bit of drama on the day was reserved for the last five minutes of a few games on matchday 21.

Forest Green Rovers scored two dramatic injury-time goals to snatch a 2-1 win over Yeovil Town. Reuben Reid and then George Williams, both found the back of the net after 90 minutes despite having had Paul Digby sent off earlier in the second half.

Elsewhere, Port Vale were 2-0 down with just minutes left, but scored in the 83rd and 87th minutes against Morecambe at the Crown Ground. It looked plain sailing for the Shrimps heading in to the final minutes but goals from Antony Kay and Tom Pope were enough to earn the visitors a dramatic draw.

Cheltenham Town scored a stoppage time penalty to secure a 2-1 home win over Grimsby Town in a dramatic finale. It had looked like the shares would be spoiled but Conor Thomas kept his cool to help the Robins win in the most rewarding fashion at Whaddon Road.

Jay O'Shea and Byron Moore both scored to help earn in-form Bury a 2-0 home win over free-falling Exeter City. O'Shea's eight of the season, a clinical 39th-minute opener, was added to by Moore's goal and it earnt the Shakers a fourth win in five games. They remain on the cusp of the automatic promotion places.

Kaiyne Woolrey scored a late Swindon Town winner to deny Newport County a point at the County Ground as Richie Wellens saw his side win their third straight league game and the Robins sit just four points outside the play-off positions.

Sol Campbell suffered defeat for the first time as manager of bottom side Macclesfield Town, after they lost 1-0 at promotion-chasing Colchester United. The former England international couldn’t maintain Town’s back to back winning run in the league, as Mikael Mandron scored the game's only goal to keep the U’s in the top three.

Elsewhere across the league, Oldham Athletic produced a fine display at Crewe Alexandra. The Latics captain Peter Clarke scored a screamer and Chris O’Grady added another to Oldham in to 12th, but just five points off the play-off spots.

There was another win for Mansfield Town, who beat Notts County 2-0 in the Nottinghamshire derby, as the Stags extended their unbeaten run to 13 league games. At Prenton Park, James Norwood scored his 15th league goal of the season and the only goal of the match as Tranmere Rovers beat Cambridge United 1-0.

Northampton Town won 1-0 away at ten man Crawley and are up to 14th. 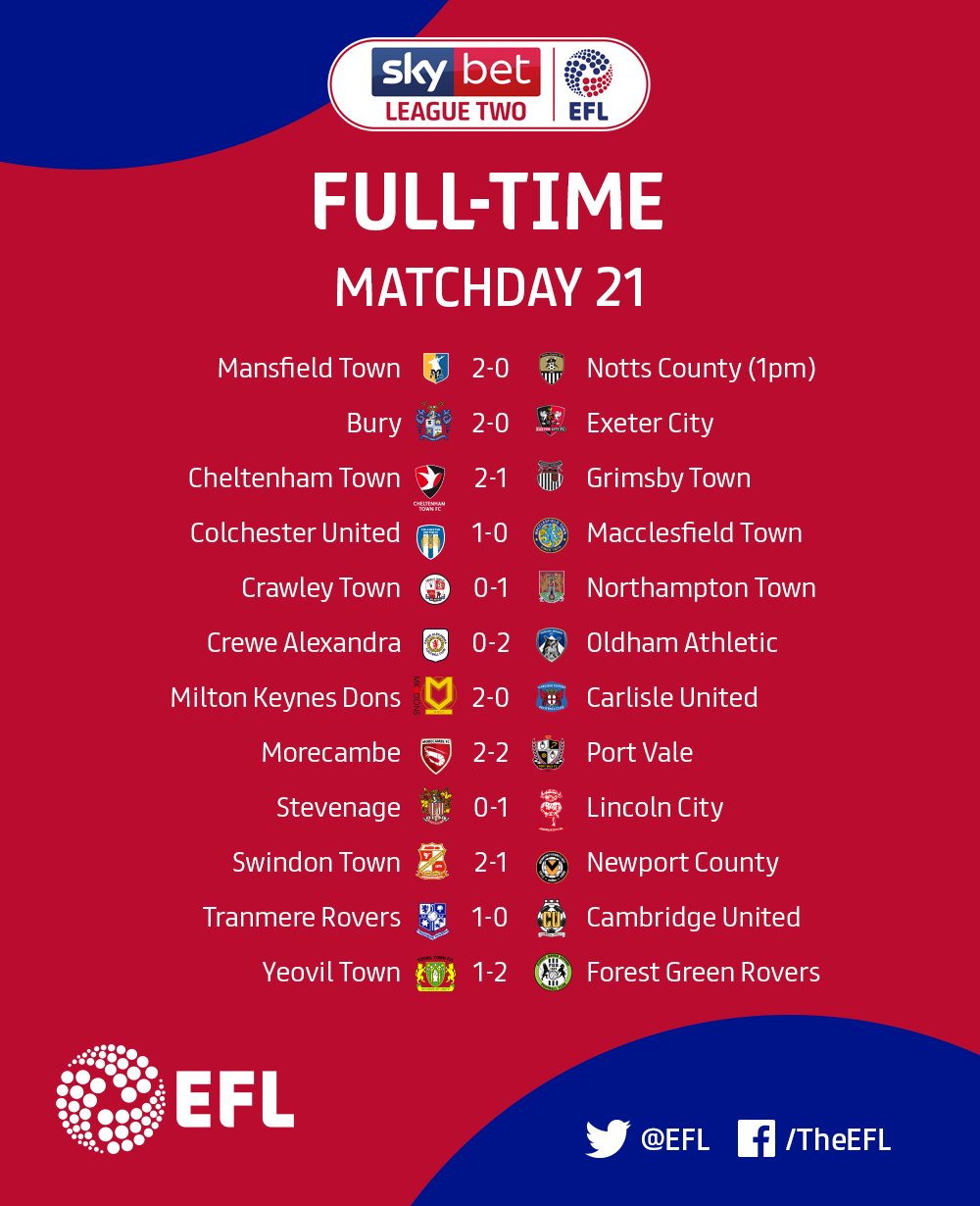